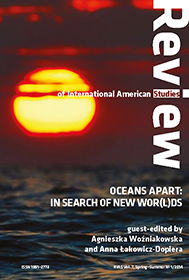 For three summer days in August 2013, the International American Studies Association (IASA) managed to attract scholars of all continents to travel to a Polish harbor town—Szczecin—to contribute to the discussions on America(s) separated from other continents by two oceans. The title 'Oceans Apart' turned out to be an intellectual provocation that proved that the oceanic separateness was illusory, as the discussions oscillated around the topics that were recognized and resonant in distant parts of the world. As the organizers intended, the speakers searched for new words to give meanings to old texts. The works of authors such as Herman Melville, Pearl Buck, Jack London, and Sir Arthur Conan Doyle inspired scholars to ask questions pertaining to the complexity of human nature and served as referential points in debates on other more modern texts. The old problems of exclusion, prejudice and stereotyping found new exemplification both in literature and in geopolitical observations. The oceanic metaphors and associations triggered a wide range of topics and multiple ways of interpreting them, thus proving that the oceans connect rather than divide people.

The present issue addresses topics related to the notion of the ocean in two ways: those that concern issues outside of the world of literature and those that refer to specific literary texts [...]. (Read more in the 'Introduction' by Anna  Łakowicz-Dopiera and Agnieszka Woźniakowska)

The World Wide Sea: Oceanic Metaphors, Concepts of Knowledge and Transnational America in the Information Age

History as an ocean

From the American Wild West to Bojszowy: Józef Kłyk’s Westerns as Social Rituals

The Young Men and the Sea: Sea/Ocean as a Space of Maturation?

Revolving the Vortex; or, Working through Trauma at Sea

Pearl S. Buck and the Forgotten Holocaust of the Two-Ocean War

United by the Ocean? The Romantic Conan Doyle and the Transatlantic Sherlock Holmes

The ‘Oceanic feeling’ in Stephen Crane’s The Open Boat and S.T. Coleridge’s The Rime of the Ancient Mariner