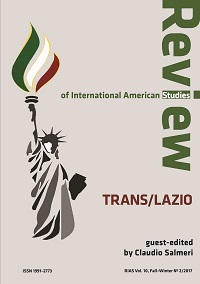 Volumes of text have been written on Italian presence in America. Even a quick Google search will demonstrate that, after the culture wars of the 1980s, the interest of Americanists worldwide has shifted to ethnic and diasporic studies within the Americas, which, slowly, begin to recognize the consequences of white ethnocentrism, whether Anglo, Franco or Hispano. Such studies, beyond doubt, are as important as they are valuable: rediscovering or uncovering essential moments in the histories of the Americas, they have provided voice to those long lost in the space of ineffability. And yet, such studies follow the “standard” directionality of the value transfer tied to each wave of migration: from Europe to the Americas. Such “translation” is, of course, essential in the study of the American cultures. Yet, bearing in mind the cultural productivity of the Americas and the demonstrable bidirectionality of the value transfer, it is just as important to dedicate some academic attention to phenomena oriented along the opposite vector: Italy, beyond doubt, has in/formed American cultures for centuries, but since the outbreak of World War II the influx of values (both intellectual and material) generated in the Americas has been responsible for the co-shaping of the Italy of today. The present volume, generously guest-edited by Claudio Salmeri of the University of Silesia in Katowice, Poland, offers a multifaceted insight into how American values have been “translated into Italian” and accommodated within the cultural space of twenty-first century Italy. (Read more in the Ed/Note)

The Troubled Presence of the United States in Italy’s Political Culture: An Overview

All Paths Lead to Rome. Establishing an Italian American Archive of the Visual Arts of the late 1950s and early 1960s

“Things Change but the Amerecano Is Here to Stay”: America in Italian Popular Movies of the 1980s

"This Town Is Against Gender": Bending Gender in Italian Culture

"Believe and tremble": A Note on Margaret Fuller's Roman Revolution

Call for Papers: Captive Minds. Norms, Normativities and the Forms of Tragic Protest in Literature and Cultural Practice