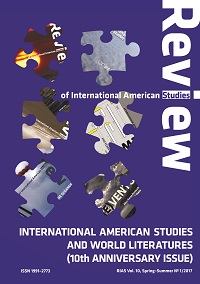 [...] Since its inception, International American Studies (IAS) had to define itself against the larger backdrop of global or world studies. However, as Paul Giles notes in his contribution to this special issue of RIAS marking the 10th anniversary of the journal and devoted to “International American Studies and the Question of World literature,” “World Literature in its current institutional manifestation is a much more recent phenomenon” than IAS, and may have “accumulated academic prestige more rapidly and securely than International American Studies has so far managed.” Whatever their different temporal and institutional trajectories, however, both IAS and World literature may be seen as efforts to come to terms with the momentous historical, political, social, and technological changes of the past few decades. Put simply, both can be considered attempts to fashion new epistemological tools better suited to making sense of a globalized world, so that, no matter how (relatively?) different their objects of study might be, a set of theoretical concerns would appear to be shared by both fields. Both students of IAS and World Literature, for example, need to venture beyond the traditional categories of the nation and of national cultures, by coming to terms with the social, historical, and linguistic complexities that such a move entails. Both have to do so in a way that “opens” one’s field and yet preserves its raison d’être, especially at a time when the humanities are under attack and the defense of academic positions and credentials—all calls for “interdisciplinarity” notwithstanding—is of paramount importance. Both need to rethink the parameters of their disciplinary specializations, that is, without pulling the institutional rugs from under their feet—a precarious balancing act which, in the age of the corporate university, with its rage for classifying, evaluating, and ranking, is far from easy to perform. (Read more in Giorgio Mariani's "Introduction").

A Timeline of the Decade

International American Studies and the question of World literature. An Introduction

The Difference that Language Makes: A Response to Paul Giles’ “World Literature and International American Studies: Convergence, Divergence, and Contest”

Theories of the Global, Global Literature, and American Literature in a Globalizing Age

The Limitations of Theory: A Response to Ulrich Reichardt’s “Theories of the global, Global Literature, and American Literature in a Globalizing Age”

Building a Counterarchive: A Response to Cristina Iuli’s “Trans-Atlantic American Studies and the Transatlantic Pedagogies: Some Methodological Perspectives and Questions”

Dispersing the Field as “Reciprocal Healing”: A Response to Mena Mitrano “American Studies as Italian Theory”

Agnotology and the Know-Nothing Party: Then and Now

The Long History of “Doublethink”: A Response to Djelal Kadir’s “Agnotology and the Know-Nothing Party: Then and Now”

Abandoning America the Better to Save American Studies: A Proposal

Subsuming “America” to the “Global.” A Response to Markha Valenta’s “Abandoning America the Better to Save America”